This was to be only a happy response to Terminator 2‘s re-release and forthcoming reunion, as well as (partly) the Wonder Woman debate that some of James Cameron’s relevant comments inadvertently triggered. But there is a real change in the horizon of our culture at the moment, caused by the Harvey Weinstein debacle. So, what follows had to also become the starting point to a series of articles exploring the already shifting female agency both in film and TV, on and behind the scenes. Buckle up. This is only the beginning.

Terminator 2: Judgement Day celebrated its 25 years anniversary with a digitally remastered, 3D re-release on the big screen. A celebration that was closely and properly followed by the announcement of Linda Hamilton and James Cameron returning to the franchise. The former, of course, in the iconic role of Sarah Connor and the latter as a hands-on producer, in a film that will reunite them both with Arnold Schwarzenegger.

Directed by Deadpool’s audacious Tim Miller this sixth installment in the Terminator saga will be approached as a direct sequel to Terminator 2 and is currently eyeing a release date sometime in 2019. The news was received both with cautious optimism, thoughtful enthusiasm or doubts. I for one, choose to trust Cameron, because of what he did then and what he is saying now.

Then, with Terminator 2, he took his own b-movie about the saviour to be of humanity against the machines and transformed it into a high-tech, ground-breaking blockbuster about an anything but a traditional or sexually objectified warrior mother. Now he had this to say for Sarah in Terminator 6: “There are certainly plenty of 50-, 60-, 70-something guys out there that just keep cranking along doing action movies and killing bad guys left and right. But there isn’t an example of that for women, and I think there should be.”

So, in anticipation of that example at long last becoming a reality let’s see what the stars and the author of Terminator 2 have been up too in all these years.

Then: A romantic lead and somewhat a damsel in distress in both TV’s Beauty And The Beast and the original Terminator, she took us by storm and completely unawares by becoming the virtually genderless, extraordinary yet deeply relatable Sarah in Judgement Day. She brought the first ever full-blown action hero into the cinematic world and in doing so, made history.

Since then: Prone to typecasting, Hollywood didn’t know what to do with Hamilton after #Terminator2. Her career peaked with Dante’s Peak in 1997 on the big screen, and then resumed on TV with a series of notable appearances in one-off or recurring guest roles in Fraser, Chuck, Defiance, Lost Girl and most recently the short dramedy Shoot Me Nicely. In most if not all of them she played a mother, oscillating between the romantic and action qualities of her acting past, but never really given the opportunity to reach Sarah’s groundbreaking strength and intricacy. Off screen she became a pioneer in breaking the taboo of mental illness, candidly speaking about her chronic battles with bipolar disorder on CNN’s Larry King Live in 2005. Previously reluctant to return to the franchise she was persuaded otherwise by Cameron – her director then, father of her daughter, Josephine, and ex-husband afterwards, long time friend now. She is currently training in preparation for Terminator 6 to much of her fans’ elation.

Words of wisdom: “Yeah, right. How are you supposed to know? Fucking men like you built the hydrogen bomb. Men like you thought it up. You think you’re so creative. You don’t know what it’s like to really create something; to create a life; to feel it growing inside you. All you know how to create is death and destruction…”  Sarah says it all to the future creator of Skynet, Miles Dyson. Her words combined with her actions fully imply that a woman doesn’t have to be a mother or anything else. She can be a mother and everything else. Even someone who is prepared to deal death and destruction in order to protect those she holds dear.

Then: Reprogrammed by John in the future to be his own protector in the present, Judgement Day’s Terminator was a cold, hard killing machine no more. Instead he became an ever-present surrogate father able and willing to learn the value of human life. Arnie had the chance to further flex his substantial comedic muscles, which he had just discovered in Twins and Kindergarten Cop, thus expanding his range and affirming his status as Hollywood biggest star at the time.

Since then: On screen it was in comedy he truly shined, teaming with Cameron again in the epic, unusual romcom True Lies and hilariously connecting with his feminine side in the criminally underrated Junior. He was also the only one of the original creative team that stuck with the Terminator franchise for the first (Terminator 3: Rise Of The Machine) and the last (Terminator Genisys) of its subsequent three (Termination Salvation being the middle one) misadventures of no avail to his faltering cinematic career. Off screen he found his place in the word and to an extend redeemed himself for the ugly scandal of his extra marital affairs that erupted in the public eye during his separation from Maria Shriver. How? By being one of the best, environmentally highly conscious Governors of California for two consecutive terms back in 2013, one of the most progressive, moderate and sane Republican voices in American politics and one of the most persistent and fearless critics of President Trump.

Words of Wisdom: “Hasta la vista, baby”. The Terminator shoots T- 1000 to a million pieces and proves his ability to learn and evolve, astutely mastering the concept of humor.

Then: He had already changed the game with Aliens’ Ripley and The Abyss’s Lindsey. But with  Terminator 2’s Sarah who appeared (tank top and muscles on display), talked, handled guns and acted like any of her contemporary male action heroes (think Bruce Willis and Die Hard ) he solidified his ability as a feminist, or rather “equalist” mega blockbuster filmmaker.

Since then: He directed the two highest grossing movies of all time. First, in 1997, in his words, “his one million dollar chick-flick”, Titanic. And then, 12 years later, his sci-fi, extra-terrestrial, echo-friendly allegory, Avatar. In between he made record-breaking history by pursuing his other, more scientific interests, including visiting and revisiting the Titanic wreckage, as well as reaching the deepest part of the Marianna Trench in collaboration with National Geographic. He also, unexpectedly, found lasting happiness with Titanic’s Suzy Amis, with whom he’s been married since 2000 and shares 3 children. He is now hard at work directing the first two of the four in all Avatar sequels, while producing both Terminator 6 (or Untitled Terminator Reboot as it’s officially termed) and Robert Rodriguez’s Alita: Battle Angel (which he also co-wrote with Laeta Kalogrides). Last but not least, a devoted ecological activist and a vegan himself, he found the time to collaborate with Arnie in promoting less meat consumption.

Words of wisdom: “Linda looked great (as Sarah in T2). She just wasn’t treated as a sex object. There was nothing sexual about her character. It was about angst, it was about will, it was about determination. She was crazy, she was complicated. … She wasn’t there to be liked or ogled, but she was central, and the audience loved her by the end of the film.” Asked about his recent comments on ‘Wonder Woman’, Cameron shrewdly reiterates his argument on why Sarah was the truly groundbreaking feminist character.

Then: A fresh, open-faced kid, handsome and yet anything but typically cute, with a deep, steady, often unnerving gaze, he perfectly embodied John Connor as a shrewd delinquent, who however possessed a faultless, inner moral compass.

Since then: 13 years old in Terminator 2 he subsequently delivered a handful of spot-on, mature performances, holding his own next to such acting legends as Jeff Bridges in American Heart, Tim Roth in Little Odessa (his personal favourite), Meryl Streep in Before and After and Edward Norton in American History X (my personal favourite). Off screen he developed his love for playing the piano and the guitar into a successful music career in Japan, his non typical good looks into lucrative modeling spells for Gap and Calvin Klein among others, and his controversial pairing with his 13 years older tutor (and later manager) Jacqueline Louise Domac into a quiet, uneventful life. But then, as he came of age, it became increasingly apparent that he was unable to handle adulthood. He was set to return as John in Terminator 3 but was fired before production even began. Sadly he has no longer been making headlines for his (meager) artistic contributions but for his interminable struggles with his personal demons through addictions, DUI convictions, accusations, arrests and restraining orders. Currently there are no plans for any involvement of his in Terminator 6.

Words of wisdom: “The future’s not set. There’s no fate but what we make for ourselves.” John tries to follow his own advice, given by his future self to his father, Kyle, as a message to be passed on to his mother, Sarah.

Then: Cold, silent, lean, sleek, sharp and relentless as a blade Robert totally had us as an exterminating machine made of liquid, mimetic metal.

Since then: Another victim of typecasting he did leave an impression in Walk The Line as Johnny Cash’s father, but it was on TV where he was given the opportunity to explore the range of his talent. He won awards and respect for his decent and dependable non- believer agent Doggett in The X-Files. He exposed a more soft, fragile side in both True Blood as Alcide’s troubled werewolf father and From Dusk Till Dawn: The Series as a broken priest and parent. He is now staring as another decent and dependable government agent, Gabe Gallo, in CBS’s hit show Scorpion. Off screen he has been living a simple, tranquil, anti-Hollywood life with his wife of 27 years, Barbara, their daughter Austin and son Samuel. So far there are no plans for him to return to the Terminator franchise either.

Words of wisdom: No words. Just a menacing forbidding movement of the finger.

Watching Terminator 2 again on the big screen now the choice of the 3D conversion may seem questionable as it didn’t really add anything significant to it. Apart from that however its re-release made perfect sense as it proved its agelessness and enduring progressive qualities. At the same time, it faultlessly illuminated how little Hollywood invested in or boldly furthered Sarah’s legacy.

It is disheartening to realise how few, if any of our cinematic female action heroes have been so complex, tackling even motherhood while being total, unapologetic bad-asses and in no way sexually objectified. Indeed Mad Max: Fury Road‘s Imperator Furiosa is the only one that readily comes to mind, and she dropped our jaws only a couple of years ago. So it is most definitely about time for Sarah (and Jim) to return and remind us how it’s done. 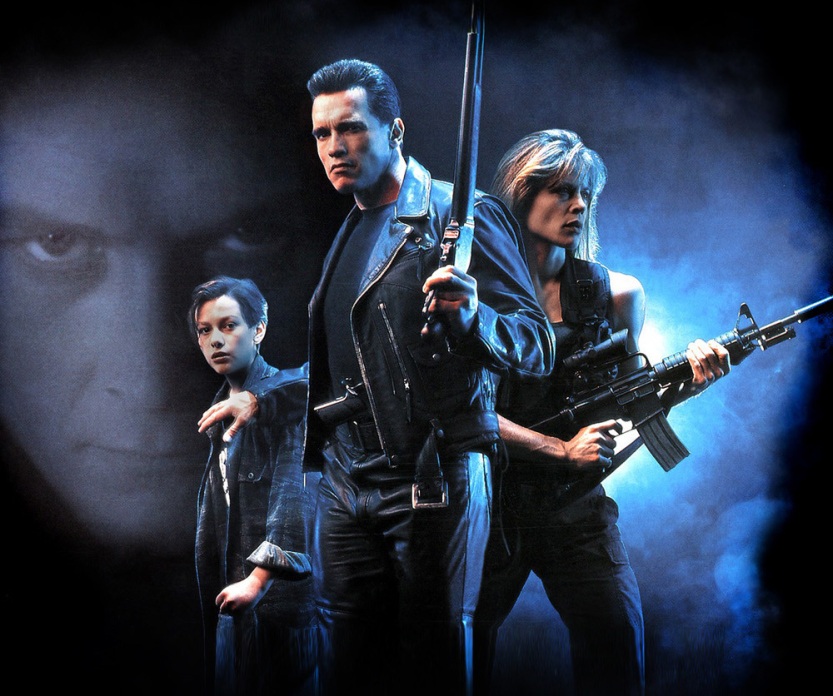