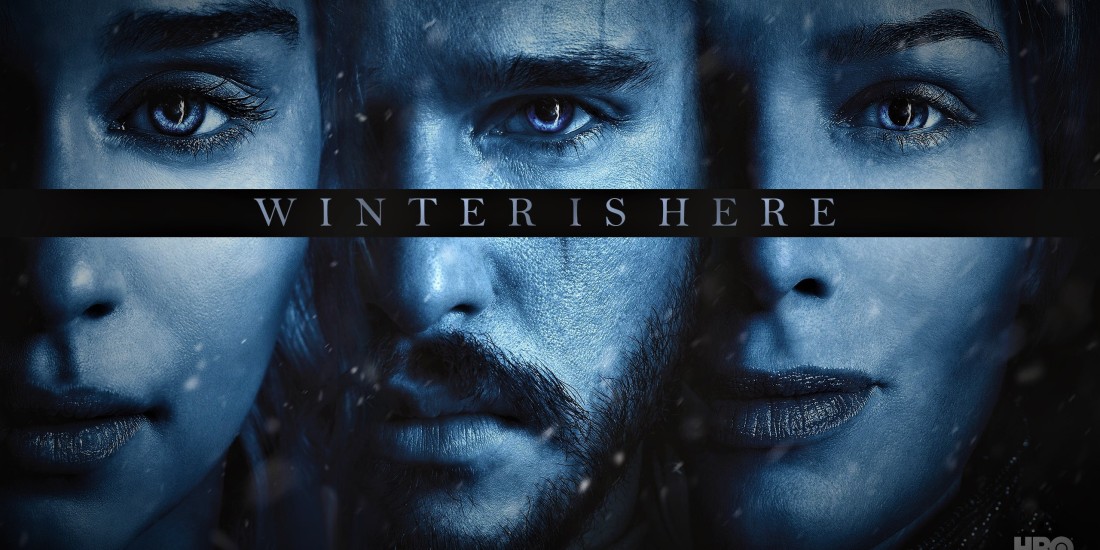 It was hailed as Games of Thrones‘ best Season ever. Last year’s Season 6 however, was merely the show’s first, unavoidable attempt to reinvent itself unbound from its literary source – G. R. R. Martin’s A Song Of Ice and Fire series of books. It was a more or less successful attempt, about to be eclipsed by (at least) the current, trimmed, seven Season. This is how and why.

The lean, mean, head splitting and heart scorching first Season rocked the pop culture, geeks and non geeks alike, collectively and simultaneously on a very deep, personal level. The second Season lacked the novelty, but kept the stakes high for its persistently grey, main characters. It also retained its commanding, cinematic in scope production and direction standards. So, unlike other pop phenomena that boldly went where no part of their in print source has gone before (see Daryl and Rick’s and Michonne’s coupling in The Walking Dead for example), David Benioff’s and D.B. Weiss’s creation was making TV history, while remaining meticulously faithful to Martin’s literary saga.

But then occurred the almost… catatonic Season 3, where very few things actually happened. At some point around midseason, Sam Tarly faced and defeated a single White Walker even though we were promised an army of them in the – jaw dropping – last scene in the Season 2 finale. Daenerys continued her liberating march by finally letting her dragons loose to punish her enemies. Both Jon Snow and Jamie Lannister were stripped to the bone, immersed into some sort of pool and underwent a kind of baptism/redefinition of character by two extraordinary women (Ygritte and Brienne of Tarth respectively). Meanwhile, Theon Greyjoy was relentlessly, interminably tortured by Ramsey Bolton in every other episode. And of course the (unnecessarily) brutal, infamous Red Wedding came to pass in Episode 9. Apart from these, easily fitting in three, maybe four episodes, significant developments, we were treated firstly with a lot of very long walks, a lot of very long talks. Secondly, with Podrick’s… sexcapades! Plus some new, secondary characters’ abrupt comings and goings – Yara Greyjoy’s more surprisingly, who we haven’t seen since last season. Yet, in Episode 10, she decides to set sail and go rescue her brother, even though she vehemently scorned him till then.

The long lasting shock-waves Red Wedding (in the marvel of a TV episode The Rains Of Castamere) send through any kind of public discussion were an inescapable distraction. So the fact that for a whole season of 10 incoherently paced episodes we were only given crumbs of character and story progression were more or less overlooked, with The New York Times’ Mike Hale being one of the very few unflappable enough to take notice. Benioff and Weiss had seemingly lost their magic touch. Their story telling was now drawn out, blubbering and uninspired. Stuck in an unfitting to TV, book-reading rhythm, as if they were no longer able to translate literature to motion pictures. It was as if they were waiting for something.

The never-ending (off screen) story

Season 4, covering the second part of the humongous, third book of Martin’s saga, exhibited signs of improvement early on as Joffrey’s fatal wedding took place in Episode 2– another fascinating, masterful TV hour. It also revealed that the show’s creators do possess the will and ability to productively veer off their source material after all, by choosing not to reincarnate Catelyn Stark as the vengeful Lady Stoneheart (in that instant at least). Yet, it soon became clear that the pacing of the series remained problematic. Substantial story highlights, like Tyrion’s trial or his and Cercei’s champions’ duel, were sporadic and far apart. Daenerys’ march began to lug, so much so that its aim was by now easily forgotten. The newcomers, including Margaery Tyrell, Stannis Baratheon and especially Oberyn Martell and Ellaria Sand, were not given enough space or time to be anything more than plot devices motivating some of the main characters actions and reactions. As a result we cared little for their fate. And questions for the show’s attitude towards women were raised again, (accusations of unnecessary nakedness and sexualisation of the female body had followed it from the very beginning), and this time with a vengeance due to Cercei’s virtual rape by Jamie at their son’s funeral.

At the same time, off screen, the drama of Martin’s inability to complete and deliver the long overdue, last two (6th and 7th) books of his Song was peaking, with no end/due date in sight. The show’s home, HBO, its creators and the fans started to realise that soon they would have to venture into the unknown. The former would have to continue the story beyond the point that the conclusion of the 5th book had brought it. The latter would have to accept or find their way around the fact that in due course the series will inevitably start spoiling the books. And all had to come to terms with the reality that no amount of televised… stalling could make Martin write. Some bold, risky and fearless decisions had to be made.

To keep Bran Stark completely off Season 5 was the first of them.  just when  But it did seem like a bad omen, since on one hand he had just, finally met the Three Eyed Raven (and his destiny). And on the other, the pacing of the narration remained persistently and familiarly awkward in the first few episodes. New high profiled supporting characters like the High Sparrow, Tommen Lanister and the unholy trinity of Ellaria daughters, also known as the Sand Snakes predictably proved inconsequential in themselves. Simultaneously the cries lamenting female characters’ mistreatment intensified as Sansa suffered abuse on her wedding day to Theon’s torturer, Ramsey Bolton, Stannis’ teenage daughter was sacrificed to the Lord of Light, the most innocent of the Lanister brood, Myrcelaa was poisoned, and Cercei endured an extremely long, viciously humiliating walk of shame.

Yet, concurrently, midway through its 10 episodes run, this Season clearly picked up the pace, finding every so often the lean, mean, awe provoking rhythm of the show’s good old days. From Episode 6 onward in particular something… head splitting, heart scorching or outright spectacular happened. Systematicaly, usually at the concluding moments of each hour. Apart from the above female tragedies, there were Jon Snow’s and the wildling’s unexpected battle with the Night King and his ever expanding army of White Walkers, Daeny being rescued/kidnapped by one of her dragons, and of course the most socking and effective season finale the whole series had ever come up with: a gradual close up to Jon’s face as he lies dying on the snow, betrayed by the Night Watch .

A new hope… for spring

Jon’s death rattled the pop culture more and for much longer (all the way to the EMMYS, where Game Of Thrones finally won Best Drama) than the Stark patriarch’s beheading or the Red Wedding. Understandably, as Jon was a beloved character and since there was no more tales in print his fate was now uncertain. Again, some expressed anger, this time for the show’s choice to kill off one of their favourites, even though it was just adhering to the books. For others (myself included) however, Jon’s untimely and painful demise triggered an intrigued reinvestment to it. Even if the theory of Jon’s resurrection, heavily circulated by the hard core fans, proved right, spoiling some of our excitement. Because finally, all bets were off. How would the narrative evolve with only notes and suggestions by Martin? And how would Benioff and Weiss deal with the fact that – apart from a remaining bit of Bran’s story – from now on they would do the spoiling? An inevitability they only recently admitted.

Season 6 was not the revelation we had hoped for but it came very close to Game Of Thrones’ perfection during its inaugural year. Most of the supporting characters remained inconsequential in themselves, while now and then the show seemed to repeat itself, especially with Daeny’s another ordeal by and fiery triumph over the Drothaki. But from its first hour to its last, this was a journey full of emotional highs (Jon’s foretold resurrection, Hodor’s self-sacrifice holding the door), heady disclosures (Melisandre’s vulnerable, ancient true self, Cercei’s ruthless vengeance and accession to the throne) and bloody brilliant spectacles (The Battle Of The Bastards). Television greatness could be achieved without blindly following the literary original after all – a lesson Game Of Thrones should have learned sooner.

Better late than ever though, particularly if this protracted, uneven route was what it took to reach the clarity of pace, temperament and spirit of the current, penultimate, only seven episodes long, Season Seven. Where, sure, Ellaria’s and her Sand Snakes’ utter uselessness and expendability were at long last – quickly and precisely – exposed. And where Theon has yet to really prove himself, along with the necessity of his punishingly stretched out torture back in Season 3. Never the less, there is no more stalling, no more waiting. Fire/ Daeny and Ice/Jon have finally met. The former’s rebirth as a reluctant, humble leader who campaigns for togetherness and understanding has become abundantly clear. Most of the remaining Stark children found each other again. The outcast Tyrion remained front and center in almost every episode, quietly but substantially advocating belief in diversity and inclusiveness. Daeny already led her horsemen and one of her dragons in battle once. The series substantiated its feminism by audaciously completing its portrayal of a varied array of strong, complex, anything but simply wives, mothers, lovers or daughters, female movers and shakers: from Queens Cercei, Daeny, old lady Tyrell and (very) young lady Mormont, to honorable soldiers Arya and Brienne, and a-force-to-recon-with in the making, Sansa. And all these in only four episodes. Yes, Season 6 and quite possibly Season 1 are about to eat dust.

Categories: On film & other blessingsTags: A Song Of Fire And Ice, D.B. Weiss, David Benioff, G.R.R. Martin, Game Of Thrones, GoT S07, HBO, The Walking Dead